The DENR-RBCO Vision and Mission:

A nation with sustainable water resources that meets the needs of its people in terms of water supply, irrigation, sanitation, hydro-power, generation, recreation, and navigation.

To lead an Inter-agency, Multi-Sectoral and Multi-Institutional Funding Agency Partnership to achieve its Vision. 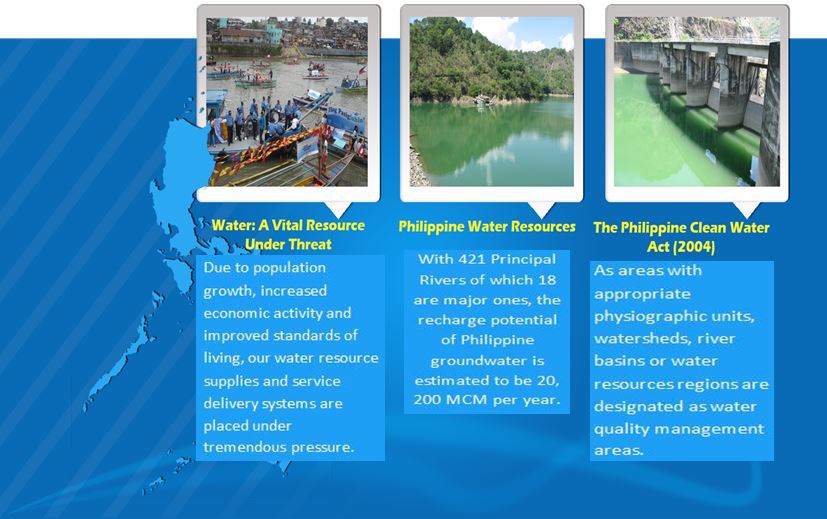 The RBCO, as the lead government agency, shall specifically execute the following power and function.

1. Rationalize and integrate all national plans, projects, and programs within the country’s river catchments basins, with the authority to serve as the oversight office of all various government agencies and corporations with relevant and related river basin initiatives, projects, and programs, such as, but not limited to, river basin infrastructure development, flood control, environmental protection, and integrated water resources management.

To this end, such government agencies and corporations shall coordinate their planned and ongoing river basin initiatives with RBCO, to which the RBCO shall review and endorse approval and funding from the national budget thereof as may provide under existing laws, rules and regulations;

2. Harmonize all relevant national river basin policies, formulate new policies, and create an enabling policy environment that shall allow effective and efficient management and governance of the country’s river basins. To this end, all national government agencies and corporations shall consult with the RBCO in such planning and implementation, and have the RBCO as an ex-officio member in the policy steering or project implementing boards as may be created, therefore;

3. Serve as the national policy coordination office for local government units and non – government organizations in the development and sustainability of all river and catchment basin initiatives;

4. Serves as DENR’s implementing office in the implementation, monitoring, and evaluation of DENR’s programs and projects within the country’s river basin;

5. Serve as central fund administration for river basins appropriation provided under the DENR’s budget that shall allow a more rationalized and optimized management of government public spending; and

6. Serve as the government’s central river basin database management agency, to which all government agencies and existing river basin organizations with relevant mandates and development initiatives within the river basins are required to cooperate and regularly submit their updated database for integration and consolidation by RBCO using River Basin Integrated Information Management System (RBIIMS).

Executive Order No. 510 dated March 5, 2006, mandates the River Control Office under the DENR to rationalize various river basin projects such as, but not limited to the following; The Pasig River Rehabilitation, KAMANAVA flood control, Agno River, and Allied River Basin Flood Control, and to promote and advocate an integrated river basin management to ensure the protection of the environment and people against flood and natural
disasters.

Executive Order No. 816 dated July 06, 2009, declares the River Basin Control Office under the Department of Environment and Natural Resources as the lead government agency for integrated planning, management, rehabilitation, and development of the country’s river basins.

By this Executive Order, the River Basin Control Office (RBCO) under the Department of Environment and Natural Resources (DENR) is mandated as the oversight agency for all government efforts and initiatives within the country’s river basins. The Constitution mandates the State to protect and promote the conservation and wise use of the country’s natural resources to achieve social development, economic progress, and ecological stability;

The Medium Term Philippine Development Plan (MTDP) of the government and the formulation of a comprehensive development plan for the water resources of the country;

The integration and harmonization of various government mandates and resources on the provisions for safe and clean water supply and effective flood control management for the entire country is emphasized in the MTDP;

The reforestation of watersheds, coupled with the establishment of water quality, effective flood control and measures, and the implementation of an integrated water management scheme are highly recommended for the sustainable supply and allocation of safe and clean water;

Section 4 of Executive Order (EO) No. 192, series of 1987, mandates that the Department of Environment and Natural Resources (DENR) is the primary government agency responsible for the conservation, management, and development of the country’s environment and natural resources, as well as their proper use, and shall ensure the equitable sharing of the benefits derived from there for the welfare of the present and future generations of Filipinos;

Existing river basin and flood control projects should be rationalized into the Integrated River Basin Development and Management Framework Plan;

These master plans for integrated river basins management should include sectors and areas in the country which are not in the vicinity of major river basins but are nevertheless vulnerable to water shortages, water pollution, major flooding, and landslides.

The department, bureaus, office, agencies, or instrumentalities, including government-owned or controlled corporations, are directed to extend such assistance and cooperation as the RBCO may need in the discharge of its function under Executive Order No. 816